Mukhyamantri Mahila Utkarsh Yojana – Rs 1 lakh Loans 0% interest. For the first time in the state, Mukhyamantri Mahila Kalyan Yojana will be launched and loans will be given to more than 10 lakh mothers and sisters at 0% interest. Gujarat’s women power will take the lead in realizing the resolve of a self-reliant Prime Minister of India.

On Prime Minister Narendra Modi’s birthday (September 17), Chief Minister Vijay Rupani will present the Mahila Utkarsh Yojana to the mother power of the state. In the changed socially-economic lifestyle after Corona, a new path of self-reliance of women-mothers-sisters will open up.

A total of 10 lakh mothers and sisters of 1 lakh women’s groups in the state will get the benefit of Mukhyamantri Mahila Utkarsh Yojana.

On the Prime Minister’s birthday, the Gujarat government will benefit more than 10 lakh women in the state

On September 17, the Chief Minister will present the Mahila Utkarsh Yojana to the mother power of the state 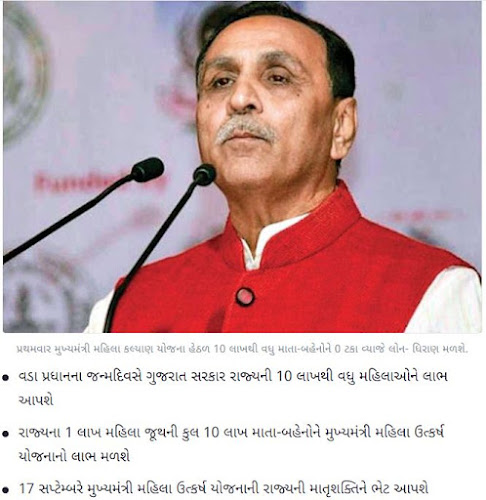 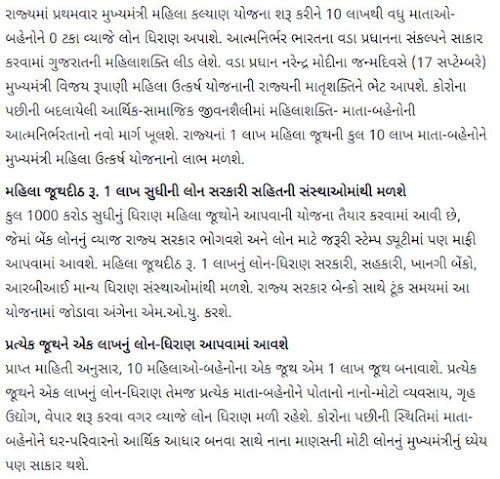 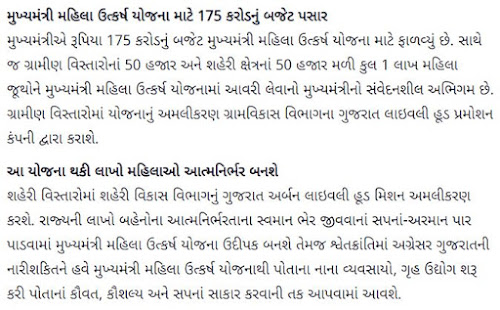 Rs. Loans up to Rs 1 lakh will be available from institutions including government

A total of Rs 1,000 crore is planned to be lent to women’s groups, in which the interest on bank loans will be borne by the state government and the stamp duty required for the loan will also be waived.

Rs. Loans of Rs 1 lakh will be available from government, cooperative, private banks, RBI approved lending institutions. The state government has signed an MoU with banks to join the scheme soon. Will.

One lakh loan will be given to each group

According to the information received, a group of 10 women-sisters will be formed in M1 lakh group.

Each group will get a loan of one lakh and each mother and sister will get an interest loan without starting their own small or big business, housing industry, business. In the aftermath of Corona, the CM’s goal of a big loan from a small man will also come true as the mothers and sisters become the financial support of the home-family.

The Chief Minister has allocated a budget of Rs 175 crore for the Mukhyamantri Mahila Utkarsh Yojana. At the same time.

The Chief Minister’s sensitive approach is to cover a total of 1 lakh women’s groups in the Mukhyamantri Mahila Utkarsh Yojana, which is 50,000 in rural areas and 50,000 in urban areas. The scheme will be implemented in rural areas by Gujarat Lively Hood Promotion Company of Rural Development Department.

The scheme will make millions of women self-reliant

Gujarat Urban Lively Hood Mission of Urban Development Department will be implemented in urban areas. Mukhyamantri Mahila Utkarsh Yojana will be a catalyst in fulfilling the dreams of millions of sisters of the state to live with self-reliance.