GUJARAT NEW CM & DEPUTY CM NAME DECLARED The legal process for the formation of the 14th Assembly in Gujarat is completed. Generally, the names of their leader and sub-leader are suggested together in the presence of the elected members of the party, in the presence of the observer and the guardian. It convinces the elected members of the party to applaud. Then the name of the new Chief Minister, Vice Chief Minister is announced. 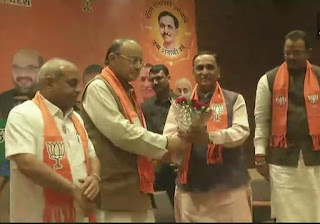 All the BJP’s elected MLAs were present in the meeting held at Kamalam under the chairmanship of Arun Jaitley. Arun Jaitley had a meeting with various key leaders in the meeting. The consensus was laid on the appointment of CM and deputy CM in the meeting. After considering the discussion with the central observer, Bhupendrasinh Chudasamma, on behalf of the BJP’s elected MLAs, proposed the name of Vijay Rupani as leader. It was declared as the Chief Minister of Vijay Rupani, who was lauded. After that, the name of Nitin Patel was announced as Deputy CM. This time the talk of two deputy CMs was going on for the past two days. But in the absence of Vijay Rupani and Nitin Patel, the responsibility